Physiotherapy Competency Exam (PCE), Why It Must Change (Or Not) To Reflect Current Evidence
By: Nataliya Zlotnikov MSc, HBsc

The What, When and Who

On 15 September 2021, Darryl Yardley, physiotherapist, and founder of Mentorship Bootcamp hosted a live webinar, Why the PCE Must Change (Or Not) To Reflect CURRENT Evidence, as part of his PCE Webinar Series.

Much was discussed on this day, and much remains to be discussed.

Take a look at this 45-second video in which Michel Landry expresses his support and discusses what he hopes to achieve in the next hour.

One of the ideas that Maggie, Darryl and Michel arrived at at the end of this webinar was the creation of a GoFundMe campaign in support of the PT Residents and IEPTs who are waiting to be licensed.

The funds will be used to create a national mental health support program and other programs to support the advancement of physiotherapy in Canada.

On 14th September 2021, the Canadian Alliance of Physiotherapy Regulators (CAPR) Board of Directors asked the CAPR staff to cancel the virtual examination.

This marked the 4th cancellation of the PCE Clinical Component since the start of the pandemic.

With so many justified strong emotions in the air, this webinar could have taken many turns.

However, the host and panellists opted for a respectful, progressive, and open discussion around these difficult issues as they sought to find a way forward for our profession.

The webinar primarily focused on finding immediate solutions to support our PT colleagues (both nationally and internationally trained) going through this difficult time, and those slated to graduate in the coming weeks.

We understand that many of you were unable to attend the live webinar. We are sorry to have missed you. But we'd like to catch you up on what was discussed.

Below is an outline of the major topics that were discussed in this webinar.

Each point will be expanded upon in the blog below.

I. Why Did CAPR Choose to Relaunch Another Virtual Exam Instead of Going Back to In-Person? 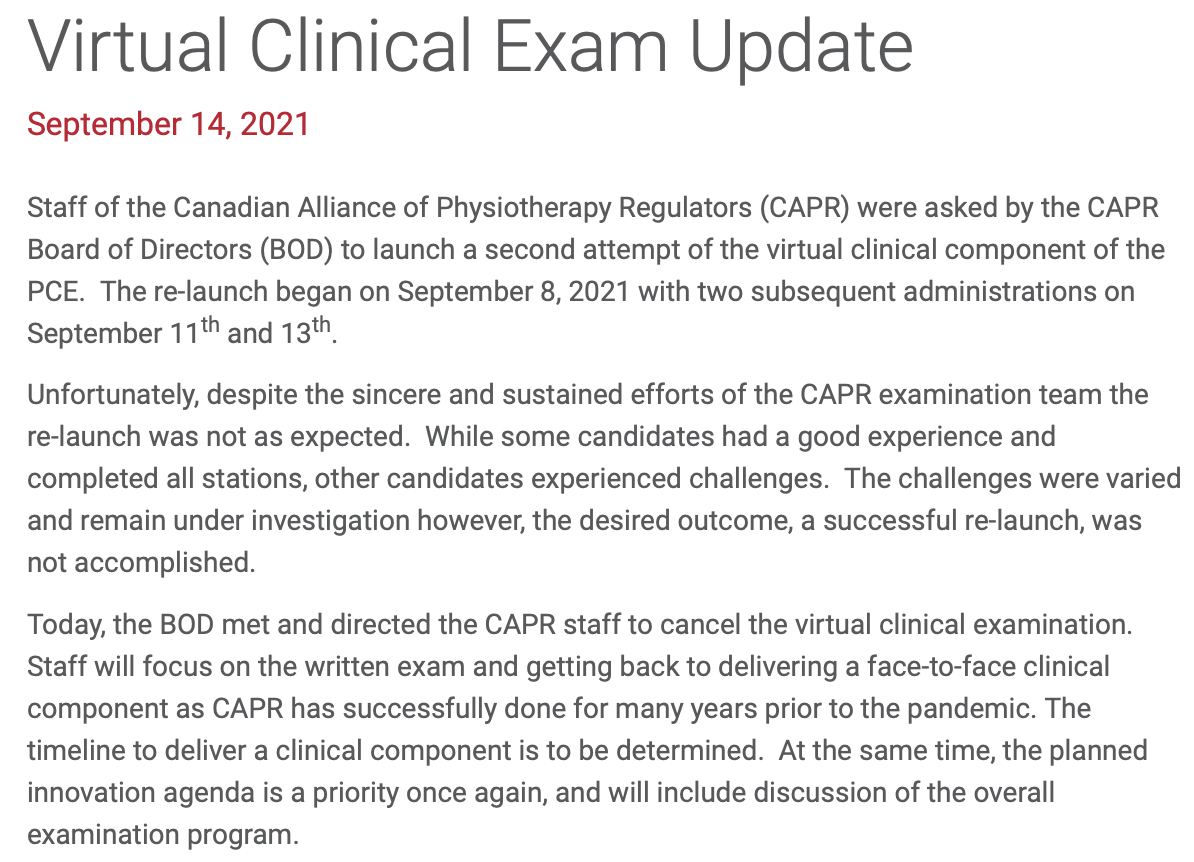 Let's start this segment by clarifying that none of us actually know why this decision was made.

That being said, the major hypothesis amongst the attendees is neatly summarized in the sunk-cost fallacy.

Basically, "follow through on an endeavor if we have already invested time, effort or money into it, whether or not the current costs outweigh the benefits" (The Decision Lab, 2021). 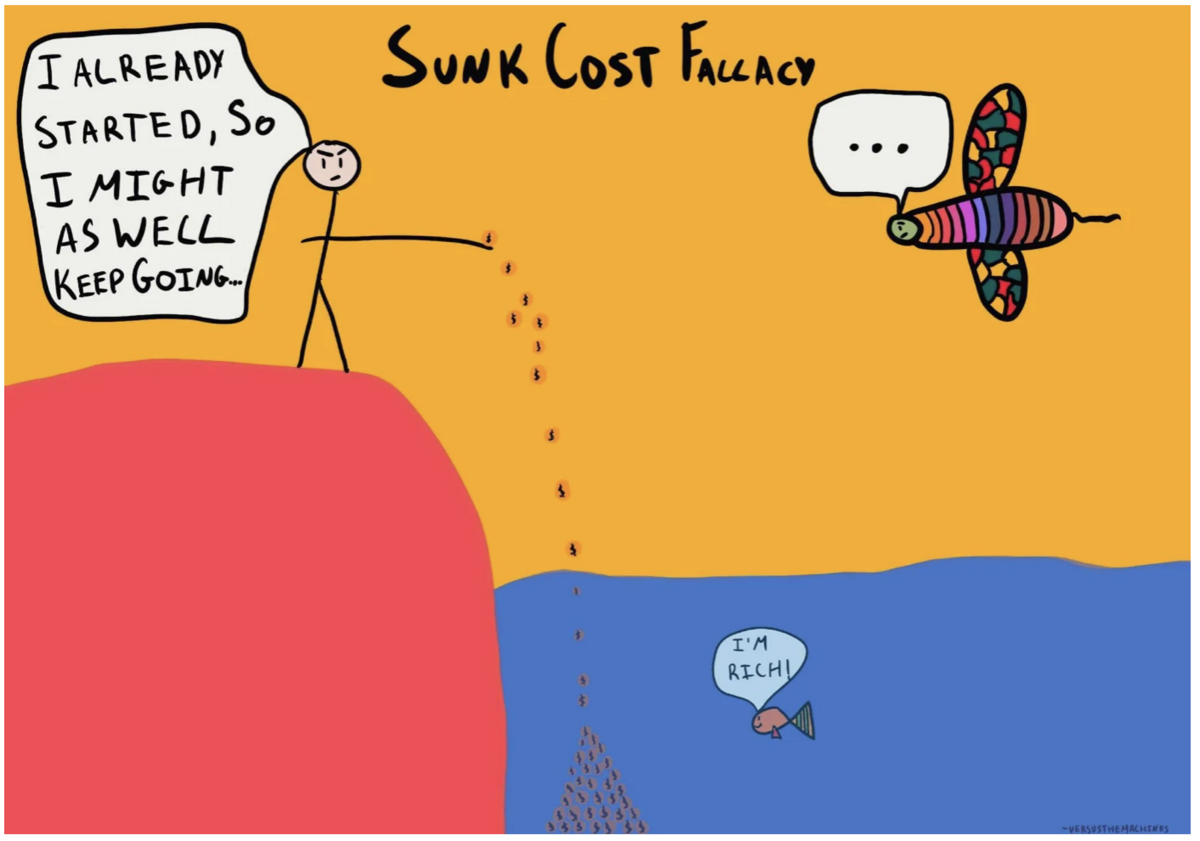 Self-proclaimed 'old and ugly', physiotherapist and Queen's University Professor, Diana Hopkins-Rosseel, has been in the PT game for quite some time.

Throughout her career she has witnessed the profession go through 3 crises; the current one being the 4th.

"There are ups and downs and controversies in every profession.

Throw in something like COVID and it will bring a lot of the difficulties that might be percolating to the surface."

She kindly took the time to impart upon us a brief lesson on the recent history of physiotherapy regulation in Canada.

We have included some of the information that she shared below, along with some additional historical information not discussed in the webinar for context.

We are nothing if we do not know our history.

Join us for this tale.

1895: Roots of physiotherapy in Canada started with a small group of British nurse-masseuses who formed the Society of Trained Masseuses (ISTM) (Miles-Tapping, 1989).

In 1915, The Toronto Society of Trained Masseuses was formed.
The Montreal Society was then formed in 1918.

In 1919 the Montreal Society applied for a Provincial Charter to formally recognize the profession.

On March 24, 1920, The Canadian Association of Massage and Remedial Gymnastics (CAMRG) with the aim of Canada-wide standards of education and practice (Physical Therapy University of Toronto, 2021).

In 1924, Ontario became one of the first provinces to regulate the profession under the Drugless Practitioner’s Act (Ontario Physiotherapy Association, 2020).

Established in 1954, The Ontario the Board of Directors of Physiotherapy was the regulator that predated the current College. The Board and all physiotherapists were appointed by the Minister of Health and the mandate included registration and complaints management. It was the first in Canada for the profession (Dianne Millette, Registrar & CEO at College of Physical Therapists of BC).

Physiotherapists were now recognized by the provincial government as one of a restricted number of self-governing health care professions (Ontario Physiotherapy Association, 2020).

At the time of these regulatory decisions, many provinces realized that they could not afford to run certifying exams provincially due to the high costs associated with them; national testing was a much more affordable idea.

Out of this need, CAPR was born, however, we must remember that CAPR is
simply 'the hired help.'

CAPR was formed in the early 1990s. Canadian physiotherapy regulators banded together to form the Canadian Alliance of Physiotherapy Regulators.

But we must remember that the true power rests within the ministries of health in the individual provinces. This power then flows down and into the colleges. 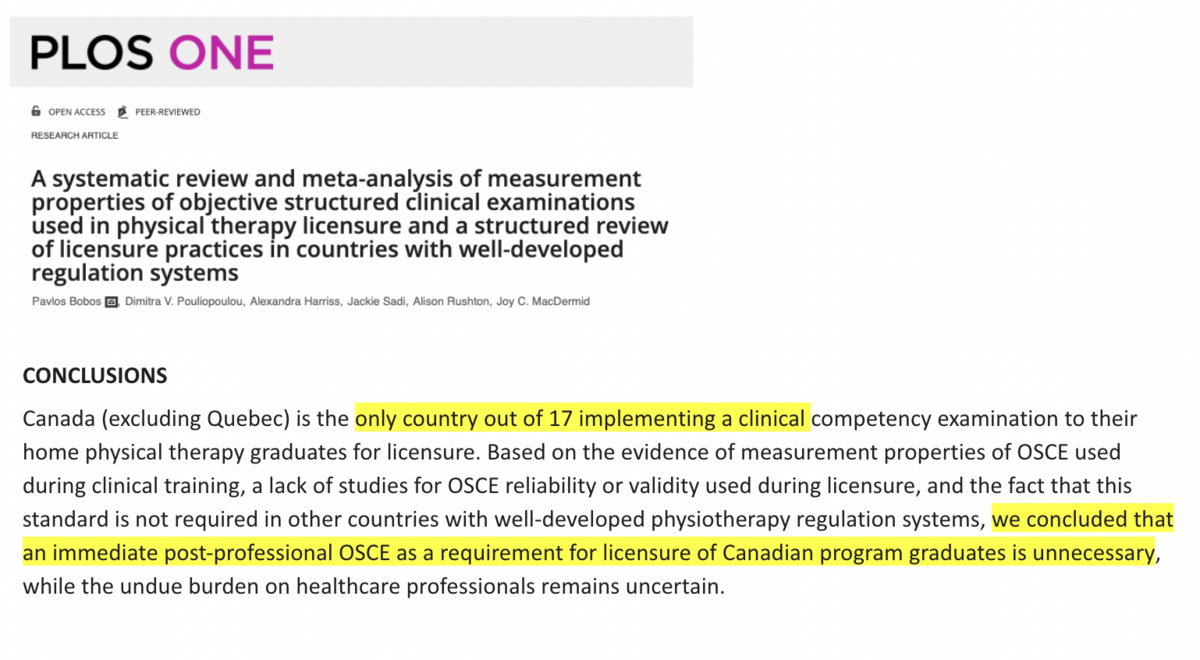 This review found that Canada (excluding Quebec) is the only country out of 17 implementing a clinical competency exam to their home physical therapy graduates for licensure.

The paper concluded that an immediate post-professional OSCE as a requirement for licensure for Canadian program graduates is unnecessary.

Diana Hopkins-Rosseel added that she and a group of colleagues are also conducting a systematic review on the OSCEs.

Their paper is not yet published and therefore cannot be discussed beyond stating the following point. Her groups' research agrees with Bobos' research on many points, however, other points diverge.

As mentioned above, the power of licensing seems to lie with each province.
So what have the individual provinces done during COVID?

Below is a brief summary table (Table 1) of the provinces discussed in the webinar. This is followed by a more detailed explanation from our provincial correspondents.

Note: Quebec is discussed in the subsequent section (Section V), The Case for Quebec.

Unfortunately, due to time constraints and a shortage of correspondents, we did not discuss every province and territory. However, we have included a link to their pertinent colleges or legislations in Table 2.

It is our hope that this cross-provincial information provides us with additional tools for learning, growth, and progress within our profession. 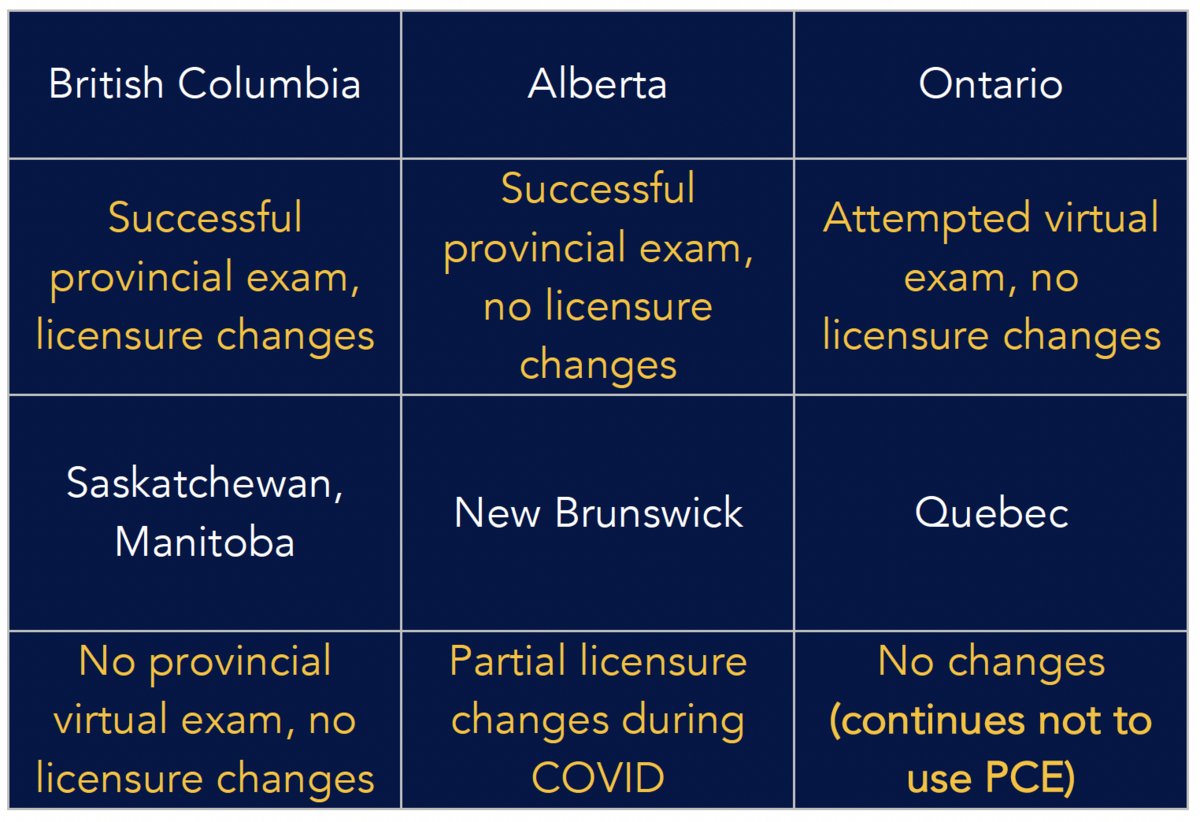 Justin Chipperfield, invigilator for the BC virtual exam

With additional comments by Chris Smerdon, Manager, Registration and Quality Assurance at the College of Physical Therapists of British Columbia:

Candidates who have successfully graduated from a Canadian fully accredited MPT program no longer be required to sit the PCE-C to be eligible for licensure in Saskatchewan. 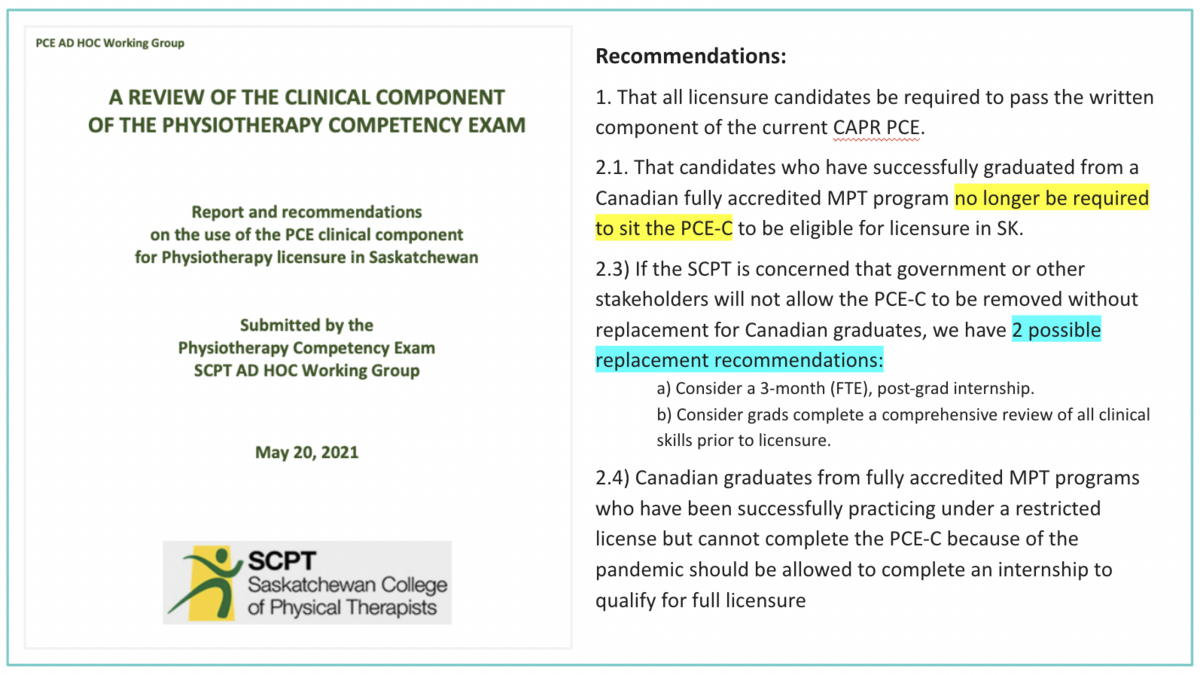 Ontario was not discussed in the webinar due to time constraints, however, we are including pertinent information below:

The Ontario Physiotherapy Association released this letter that they sent to the College of Physiotherapists of Ontario on September 21, 2021. 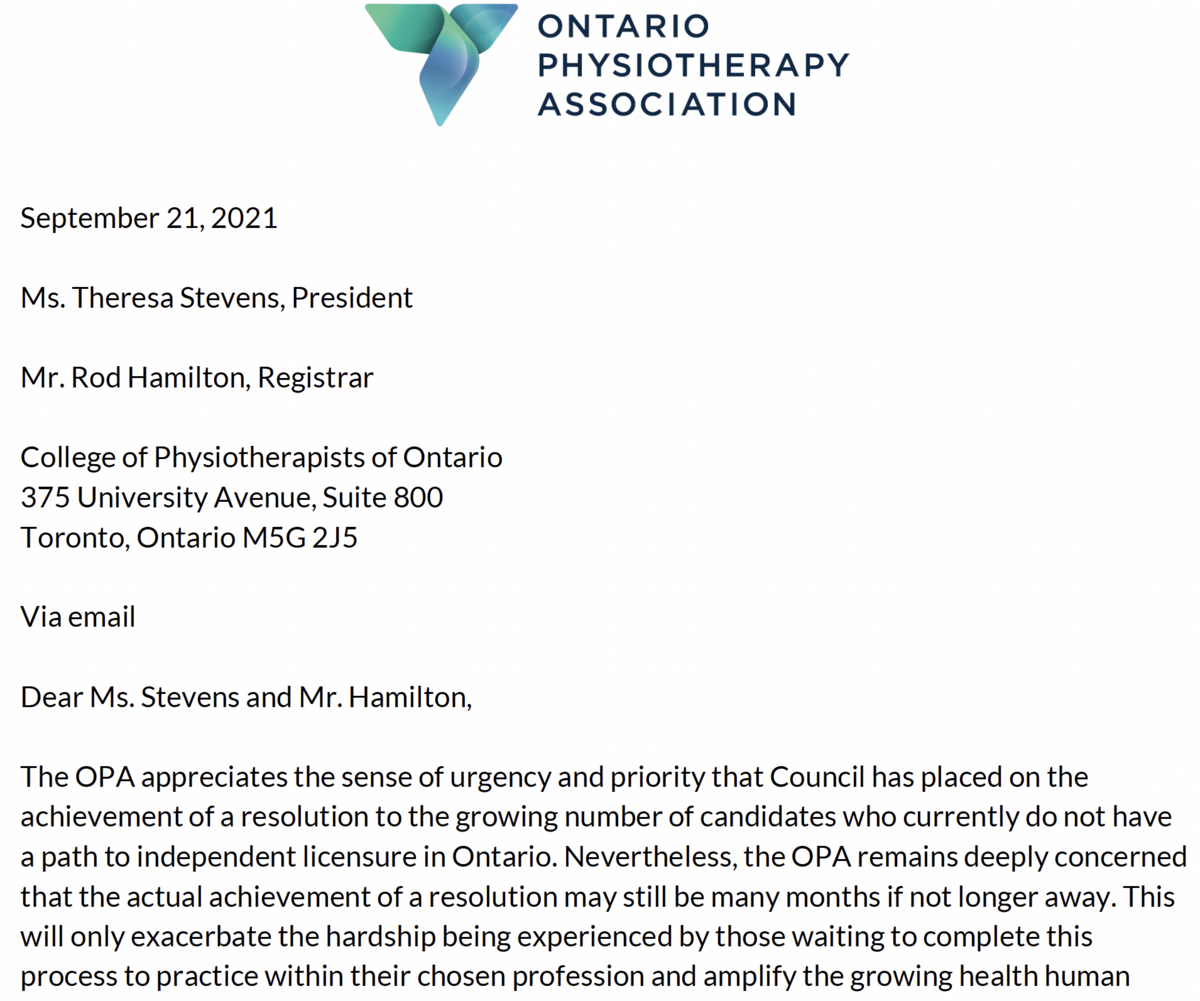 For additional information regarding each province, we invite you to visit the hyperlinked text in the table below if any of the below information is of interest to you:

V. The Case for Quebec

We have novel research regarding OSCEs and more research in the works.

So where do we go from here?

The data is important but what's most important at this present moment in time is finding an immediate solution that will help the thousands of colleagues currently stuck and struggling with this situation.

How do we best get them through the system?

How do we help them protect their well-being during this time?

Take a look at this 1-minute video from the webinar in which Darryl discusses progress, advocacy and the dangers of stagnancy:

Although we may not have all the answers, open and open-minded discourse is the first step to finding solutions.

We would love to hear from you and welcome your voices and suggestions.

We have created a GoFundMe account in support of the PT Residents and IEPTs who are waiting to be licensed.

The funds will be used to create a national mental health support program and other programs to support the advancement of physiotherapy in Canada.